I wasn’t sure where to go for what would be my last destination in Japan. I mean don’t get me wrong I had lots of options. So many places to see with only two days left before I need to be back in Tokyo & depending on where I went one of those days was going to be mostly tied up getting there in the first place.

So Nikko ended up being the place I decided on, mostly at random but I had heard favorable comments from other travelers in relation to Nikko, so ultimately that is where I settled on.

Getting to Nikko proved easy even if I was train hopping in a series of three trains with the tightest connection being 5 minutes to get from the platform I arrived at to the platform my next train departed from.

Getting to my accommodation proved simple since the accommodation that I had booked for my stay, Villa Revage offered a pick up service from the train station.

I get the feeling that most of the places in town offer options including breakfast and some even offer dinner. If you are going there you may want to give some consideration to taking them up on that offer. The food options are not much to write home about and depending on where your accommodation is it can be a fair walk to find anything. Other than that its easy enough to buy food from the small markets scattered around town.

Most of the World Heritage listed sites are clustered around the same area making walking from one to the other easy once you get there. If you are only in Nikko for the day and arrive by train at the JR Nikko train station, head straight up to the T junction then turn right, just keep walking…..

On the way up there you will encounter the Tourist Information office, on the left hand side of the road. It’s really useful and the staff very helpful. Pick up some maps and they also have a Historical Walking Map with a couple of trails marked out in the area if you are interested.

If you are not so interested in all that ‘walking’ stuff then you might want to consider a bus pass which I am told you can get from the bus station, which is next to the train station. Sorry can not give you much more info on those since I walked!

On your way up to the temples and shrines you will pass the Shinkyo Sacred Bridge. 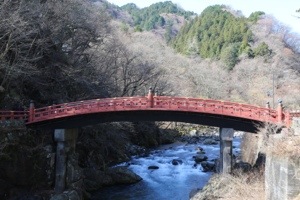 It’s a red lacquered wooden bridge, 28 meters long crossing the Daiya river. There is a legend surrounding the bridge which asserts that the bridge was built by a god using two snakes which entwined themselves to create it. This was so a priest & founder of Nikko, Shodo and his followers could get across safely.

Now I’m not sure of the accuracy of the technique & products used to build the bridge but its nice to look at! Anyway when you hit the bridge, it will be on your left if you are coming from the train station, turn left and keep walking a little further up the main entrance will be on your right.

There are quite a few pagodas, 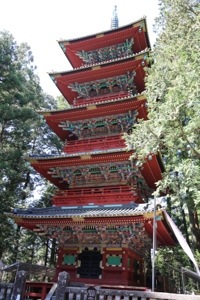 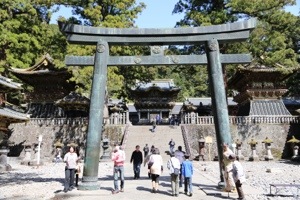 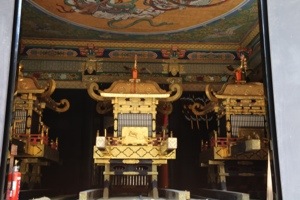 To be honest I saw so many one after the other I started forgetting which was which. I really should have taken some notes when I was entering each so I could sort it all out later! 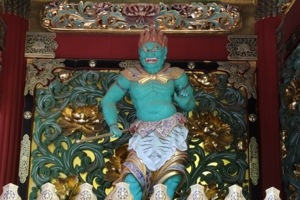 After spending hours walking around seeing some of the main attractions in town I decided to go on one of the walking trails. My choice was the Kanman Path, the whole thing is only about a 5km loop so is not hard and doesn’t take long. Saying that I came out not far from where my hotel was at the end (I’d been walking up and down the road that is travelled on the return loop so already seen the sites listed for that half.)

It was a nice walk with a whole heap of stone Jizo statues, Buddhist Guardian Deities. 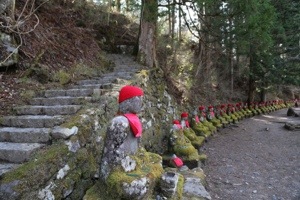 There is much more to do and see in and around Nikko which of course I didn’t get to. I did see the Nikko Tamozawa imperial villa memorial park. It’s ok but I wouldn’t worry if you do not have time to see it unless of course you are into the traditional building techniques used to restore the villa then you might want to check it out!