So I knew after visiting Kinosaki that I wanted to go to Nikko, there was quite a bit of distance between the two and I was running out of days. Still I didn’t want to do the entire run in one day although given the speed of the Japanese trains on the main routes it was possible.

Still it would have been a very long day train hopping given a few local trains were impossible to avoid. Looking at the map I settled on Nara since I had heard that it was a nice place and had a number of things to see within walking distance of the train station. That way I figured the day would not be a total waste.

There were a couple of really nice German men on the train who had also done quite a bit of travel so we chatted all the way back to Osaka about travel and the various places in the world we’d been. Nearly three hours passed without me even noticing it.

Waving good buy to the Germans I walked double time to my next train since I only had 5 minutes between arriving, getting to a different platform and leaving. You really need to watch you timing with the Japanese trains. If they say the train is leaving at 1302, they mean the train is leaving at 1302! I’ve only encountered one train so far that was late. Personally I’ve found it easier when I have multiple connections to write down the platforms that they will be departing from as well. If you are in Japan or coming here this website Hyperdia has proven to be invaluable in checking train schedules and platforms. So far at least it’s been spot on.

I finally got to Nara and installed into my hotel without a problem. Still I only had a few hours to look around. Thankfully my hotel was only about five minutes walk from the train station and a short 5 minute walk further would put me in the park area where the majority of the temples could be found.

Now I had read that there were deer in the park. Thought oh, ok how nice. Seriously once you get in the vicinity of the park they are everywhere. Including wandering around near the stalls and shops. 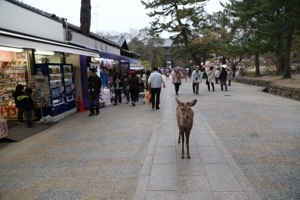 My main target was Todai-Ji Temple since it closed at 1630hrs meaning I didn’t have much time, it’s famous for the Daibutsu, Great Buddha contained inside. It is one of the largest bronze figures in the world and it was originally cast in 746. 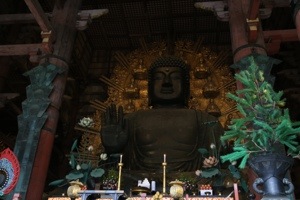 There are a number of other statues inside as well but nowhere near as big as the main guy. 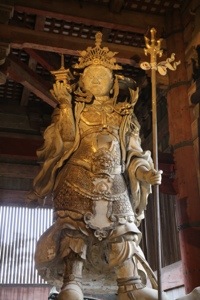 As far as I was concerned the rest of the park after that was a bonus. I wondered around looking at a number of the shrines on a loop through the park even though it was raining. I figured I could get dry when I got back to my hotel.

One of shrines that I liked in the park was the Kasuga Taisha Shrine (at least I think it was that shrine, I saw a few!) 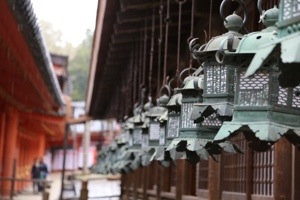 It had lanterns everywhere and was kind of pretty, I could imagine what it must look like at night with all the lantern lit up. 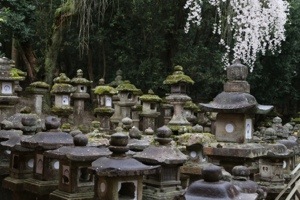 It was getting dark by this stage and the rain while not heavy certainly wasn’t letting up! I followed the loop back through the park and headed back to my hotel. You know the weather might have been horrible and I only had a few hours but I really liked Nara. It’s certainly a worthwhile place to stop and see!