One of the side effects of the unexpected trip to Wakayama was that it made it longer, time wise, to get to my next destination. To be honest I was kicking myself over that more than having missed seeing Osaka.

I had one afternoon in my original plan, now because of ending up in Wakayama instead of Osaka I was running late.

Still I made it to Kinosaki (eventually) and was installed in my Ryokan (a traditional style Japanese inn) about mid-afternoon. The Ryokan I managed to get a room in was Mikuniya. 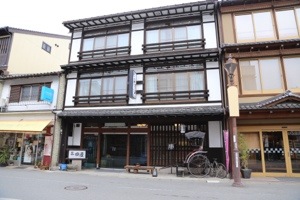 They also explained the finer points do wearing a Yukata, which was all laid out waiting for me. Too me at least it felt extremely odd dressing up in that gear and yes it took a bit of convincing to get myself to step out side dress that way. Of course saying ‘step out’ is a little deceptive giving they confiscated my shoes and when one is wearing a Yukata one also wears geta (wooden sandals) I swear those things are worse than high heals! Ok so I am used to wearing boots but one takes tiny little mincing steps unless one wants to fall on ones face (and no thankfully I didn’t do that).

Thankfully it didn’t take me long to work out that in the fashion stakes in Kinosaki the Yukata seemed to be the ‘In Thing’ right now. 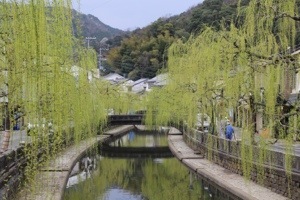 Now my Ryokan had its own private hot spring baths as well but since I had already had that experience I decided that I had to try the public bath. So looking at the seven on offer, all within mincing distance, I chose Ichino-yu, it was described as being the best in town until Satono-yu opened but since that was closed Ichino-yu it was. They also had what was described as a ‘cave-pool’ now I was hoping that it meant that they had used rocks around the pool since descending into a dark cave stark naked did not appeal to me.

Now if you have been to a Turkish Bath and had a total stranger scrub you within an inch of your life while other bathers looked on, don’t worry, the Onsen are no where near as invasive. By comparison it’s a simple process. If you haven’t had that experience do not worry, pluck up your courage you will enjoy it. If not you can chalk it up to one of life’s odd little experiences.

You enter and scan your pass, otherwise you will have to pay, the walk into the appropriate change room. There are lockers inside to store all your gear, they are not that big so do not take that much with you! You then take your small hand towel (provided by the Ryokan – otherwise bring one with you) and enter the pool area. There are a heap of show heads all lining the wall, liquid soap and shampoo is provided for use, you are expected to shower before getting into the hot spring. Lets face it. It’s a public bath. Get clean first! Then you are free to sink into the the hot spring. (Do not let your small towel/wash cloth enter the water).

I’ve got to say I loved it and I only wish we had these at home. It is so relaxing! Oh and the cave pool thankfully while outdoors which was really nice did not involve ropes and descending into a dark cave. It was just a hot spring surrounded by rocks…

I really recommend trying an Onsen while you are in Japan. They are the best, right up there with the Turkish Baths.

After the Onsen I went back to my Ryokan, changed clothes even though I was told I didn’t need to I just felt a little more comfortable in them! Then I went out for dinner. I’ve got to say I really tossed up this option. You can get a meal served in you room that is more ‘traditional’ or you can go out. I guess in the end for me I really wanted a seafood dinner particularly since that was one of the things the town was known for. Since I didn’t know what was on the meal offered by the Ryokan I opted to dine out when I booked. Can not say I regretted it since it was a great meal.

On getting back to my room I had a bit of time to relax then staff came to advise me that my treatment that I had booked was due. I had booked a massage for the evening. I so do not regret doing that, it was worth every single cent.

Basically that was my time in Kinosaki, the town is lovely, I really wish I’d had more time there but that is the way things are. You should go there. Relax. Even if its for less than 24 hours it is really worth it.