It happens when you travel sometimes. Sometimes you don’t quite up where you expected to. As it turns out I got from Kobe to Osaka without a hitch. Then I showed the address of my hotel to information and he gave me instruction for the train to get there. Things were going so well….

So there I was sitting on the train watching the world outside pass by and had that sudden realisation that I wasn’t heading to down town Osaka. In fact I had that rather disturbing realisation that I wasn’t even in Osaka anymore. Views out of your train window of hills and country scenery will do that when your meant to be in the middle of a city!

I looked at my ticket and sure enough it was the right place, but it was going to take me an hour to get there. You see when I booked my hotel online every place I looked at in Osaka had been full. The rather helpful search engine on Bookings.com pulled up suggestions for me that we’re in the area and had rooms available on my dates. Now it had worked before so that is how I picked the hotel. I realised that I had assumed that Wakayama was a suburb in Osaka. Turns out it isn’t.

It took me a bit looking at the map to find the place. Sure enough, it’s definitely not anywhere near Osaka itself. It is in Osaka Prefecture though….

So there I was in down town Wakayama quite unexpectedly. The hotel is quite comfortable at least, just as we’ll since I had booked two nights here.

Turns out there is a castle within walking distance with a park around it. Figured since I was here anyway I might as well make the most of it and go see it. The park was in full bloom and quite pretty to wander around in with the locals in picnic mode even though it was overcast and raining on and off. It almost looked like a bit of a festival going on with food vendors set up to sell there wares in the park as well. 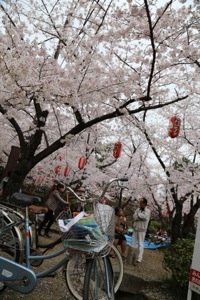 I found the castle without too much trouble and that was quite beautiful to look at as well. 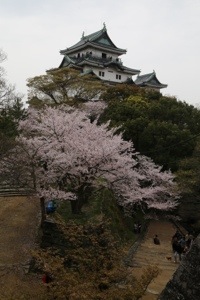 It cost about 400 yen to go inside, as it turns out inside is a small collection of armor and swords etc with surprisingly brief descriptions in English below the Japanese. So I spent a bit of time wandering around inside looking at what was on display.

On my way out I wound slowly around the park figuring I might as well see the rest of it as well. 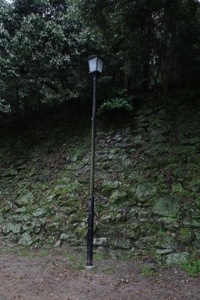 With all the cherry blossoms in full bloom it really was a nice way to spend a couple of hours. Beat sitting around in my room anyway.

Turns out the place seems to be on the tourist trail for the locals at least! So if you find yourself here in Wakayama whether by design of mistake, check out the castle and grounds, if your lucky the Japanese will be in party mode and the cherry blossoms will be blooming!