Now I am sure there are a whole host of other reasons for people to come to Kobe. I had just one. To have some Kobe Beef (wa-gyu). Now I chose to stay in a hotel here although it took less than half an hour to get here from Kyoto so it is very do-able as a day trip.

Saying that it was nice to know that after my evening meal all I had to do was wander back to my hotel not jump on trains to be whisked off to another city.

Now I did have a quick look around after settling into my hotel and Kobe is certainly easy enough to get around in and a pleasant enough town. Kitano is somewhat amusing, at least from a western perspective but I am sure the local tourists love it.

My wandering was more in order to scope out a place, preferably a steakhouse, for my evening dinner. I chose Wakkoqu. It’s in the Japan LP guide if you are looking for directions in how to get there. They also have there own website with the menu up if you want to check it out, Wakkoqu

I can say the food was amazing.

So I rocked up early for dinner, while I knew I didn’t have to go anywhere as a single person it seems to be easier to get in earlier that way I can always get a table. Otherwise some restaurants seem to prefer to hold in the the hope of getting a couple. Not that I can really blame them. They are likely to get twice the money for the same table because unless I’m spitting at the bar the table is always made up for two people, minimum.

So the table was ‘u’ shaped with a hot plate in the center. 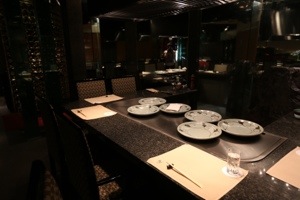 I my meal from the menu, oh and they have an English menu which makes things so much easier. I ended up choosing the Wakkoqu – Special Selected Kobe Beef, Kobe Sirlion. Not the cheapest option on the menu but then again I decided since this meal was the only reason I’d come here I wasn’t going to stint.

After selecting the meal they bring all the ingredients to the table and you even get your very own chef to cook it for you, right in front of you from scratch. 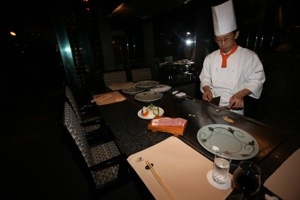 My meal included an appetizer so I chose the scallop salad and that gave me something to nibble on while I watch the chef cook my meal. 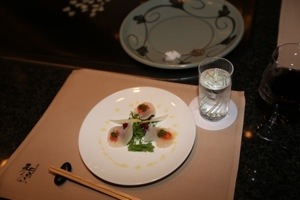 One of the nice things was the chef explained everything as he was going along. I was beginning to wonder when no steak knife and fork showed up at my table how the heck I was going to eat a steak with chopsticks without disgracing myself when he promptly cut the steak into a more manageable size, then again into bite size pieces when it was cooked. 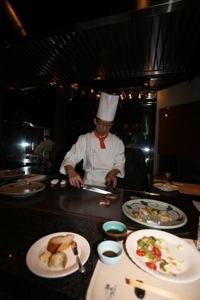 That was the other nice thing about the meal, instead of everything being cooked at once and piled on a plate before being placed down in front of you the chef cooks it in bits and pieces placing each item on the serving plate in front of you as you go along. I had a selection of freshly cooked meat and vegetables to choose from on my platter. That meant nothing was cold from the beginning to the end of my meal.

It may not have been the cheapest meal I’ve ever had but I can tell you it was worth every cent. If you like your beef & you are in Japan coming to Kobe should definitely be on your agenda!