It was an overcast, grey miserable day and I can not say it inspired me to do all that much. I did start trying to arrange my days for after Kyoto and its just as well I did since accommodation was just as hard to arrange in other places as it was here in Kyoto.

If you are coming anywhere near this area during Cherry Blossom season I’d recommend booking in advance or you’ll take pot luck with the accommodation that is left. That is likely to be a little more than you were probably going to spend.

Anyway it took some time but the next four days are arranged.

I did do one thing other than arrange onward travel and stare at the horrible weather outside. I ended up getting tickets at Gion Corner to see a show. It’s inside and warm! If you are lacking time or just do not want to fork out money for a whole heap of different shows the show on offer at Gion Corner is probably your best bet. It includes small snippets of different types of performances and goes for about 45 minutes all up.

Once nice thing was we (being the audience) were told we could take photos but try not to disturb the other members of the audience or performers. To me and almost everyone else with a camera that meant no flash and no standing because you wanted a better shot.

The second instruction was not to talk. That one was obvious.

The woman next to me looked around in disgust commenting to her partner how rude she thought everyone was.

Now personally I think it’s very rude to talk during a live performance particularly since we were all told not to. I ignored her and happily snapped the occasional photo from my seat when I could get a shot between the heads.

I would recommend taking a seat in the front row or in the seats on the centre isle if you have your camera with you and want some photos without heads in them. Unfortunately I didn’t bother since I didn’t realise beforehand that we’d be allowed to take photos.

Frost up was the Chado (tea ceremony) which two members of the audience got to experience first hand. 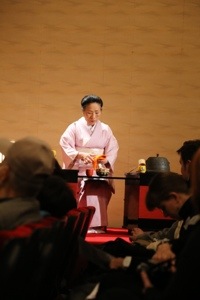 Next up was the Koto, Japanese Harp which is a thirteen stringed instrument and Kado, flower arrangement displays both were interesting to (hear/see) – they were at stage level so no photos!

Next up was the Gagaku display (court music), which dates back to the Tang Dynasty (7-9 centuries) in ancient China. Now there were musicians as well but once again they were sitting on the stage so no photos of them! There was this ferocious looking guy dancing onstage though! 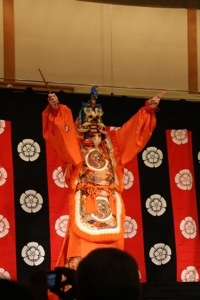 The fifth display was Kyogen which is an ancient comic play. Now even though I didn’t understand a word of it these guys still managed to be funny! (Although there was a translation of the play in the program I preferred to watch the play rather than read it!) 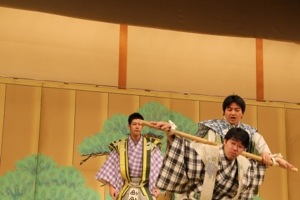 Next up was the Kyomai, Kyoto style dance performance. 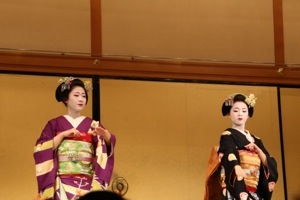 Then right at the end was the Bunraku, puppet play. Now these guys were clever and possibly my favourite of all the displays. 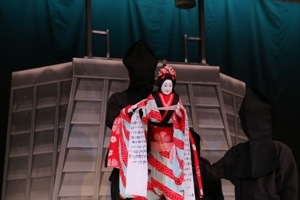 If you are in town and want to see a show its certainly worth the time and money!