I decided I wanted to see something a little bit different so I settled on going to see Daitoku-ji a complex filled with Zen Temples, raked gardens and paths. The walk to get there took me a little longer than expected but at least it was all flat and the walk itself was interesting anyway!

Admission to the complex itself is free however once you get inside only a handful of temples are open to the public and you pay individually at those temples. Needless to say the cost can start mounting up depending on how many temples you decide to see.

I settled on three temples that I picked at random from those that were open, it would be nice to say there was some great method or reason for the ones I picked. Simply there wasn’t.

The first temple I went in was Ryogen-In Zen Temple, apparently famous for its five gardens, or so the helpful little handout they gave me with the ticket explained! 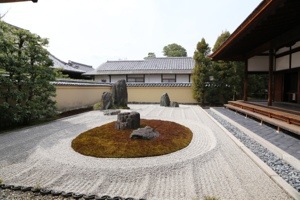 The first garden, Isshidan was a horai-san style rock garden. The centre rock represents Mt Horai, the two rocks in the right corner represent Crane Island while the moss mound is Tortoise Island, I’m not going to argue with them. 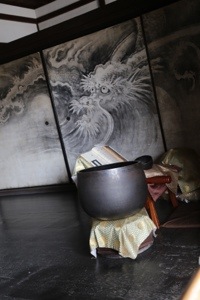 At this temple I could take a picture inside, which is a novelty so far so I finally used my tripod that I’ve been carrying around since its purchase. One can ignore the angle of that shot unless of course you think it’s terribly creative then I did it on purpose of course….

Next up was Kohrin-in, once again I couldn’t take photos of the temple itself but I could take a photo of the garden. 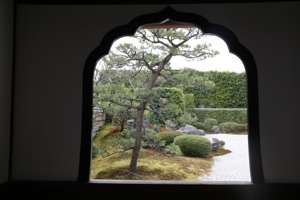 The garden apparently expresses the paradise thought of old Caina. 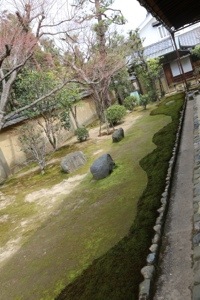 (Note to self, make sure camera is level when taking a photo with the assistance of the tripod…)

The last temple that I wandered through was Koto-in, it was established in 1601 at the behest of a famed military leader Hosokawa Tadaoki. 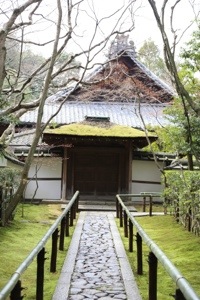 I certainly liked the approach to this one. 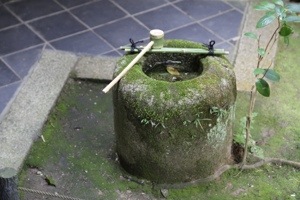 Being all zened out after a quick bit to eat at the cafe across the road from the temple I decided to walk back rather than take the bus. Looking at the map I discovered that the Imperial Palace Gardens were on the way back so I figured I might as well divert by a couple of blocks at walk back through them. 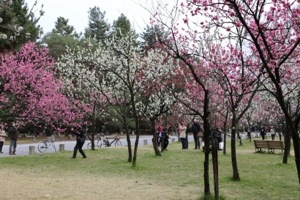 The cherry and plum blossoms are certainly starting to bloom well despite the cold, or maybe it’s always this cold! Certainly pretty though. 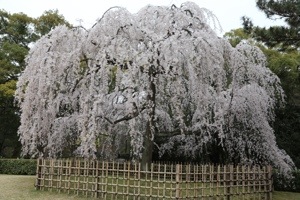 I apparently missed a pond with fish in in somewhere in the grounds, the grounds are a little. Big! Saying that I’m not walking all the way back there to see some fish…