It was grey and cold this morning so I decided to go to the Nishiki Markets which were at least under cover. Like a lot of things in Japan the market is quite, orderly but interesting anyway. You can certainly buy most things it seems from chopsticks to live fish all in one long stretch of covered market. 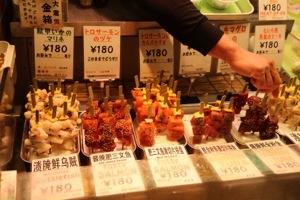 There’s a huge variety of food on a stick so you can pick at food pretty much from one end of the markets to the other. 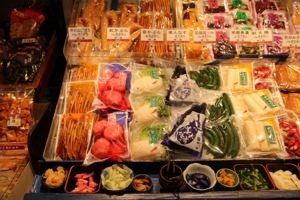 They also seem to be a little more into the ‘try before you buy’ thing here in Japan as most of the fresh produce sections had bowls of samples to try which is kind of a nice idea I thought. 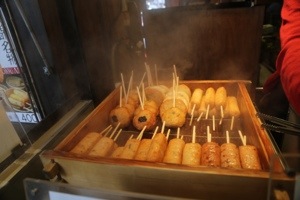 There was a gaggle of travellers surrounding one particular food on a stick stall, they seemed to be doing a roaring trade. When I got closer I realised it was probably for a couple of reasons, one the food smelt really good. Two, because they had English translations under the food on offering so people knew what they were going to be eating. 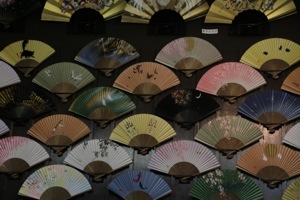 Besides the variety of food on offer you could buy everything from trinkets, bowels, chopsticks, shoes, fans. It was an interesting way to spend a couple of hours wandering from stall to stall and into the little shops.

Later on I walked from the market area out to Nijo-jo, the castle was built originally in 1603 as a residence for the first Tokugawa shogun. Since it was designated as a UNESCO World Heritage site, on of about 17 here in Kyoto I thought I should have a look. 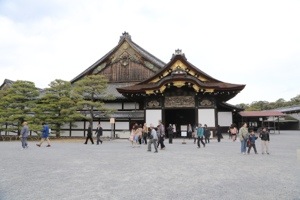 Once again there was no taking photos inside although it amazed me how many people still did! 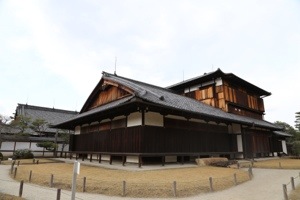 Still I contented myself by just looking inside and snapping a few photos of the outside and the grounds which were quite pretty to wander through. 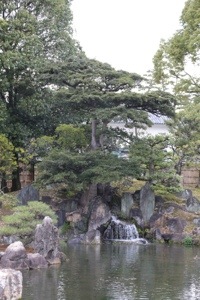 Walking back I only just had time for a coffee before heading off to the meeting point for the Walking tour of Gion which runs in the early evening from 1800hours till about 1930hours. It was quite a nice walk and the guide was certainly knowledgable which is a bonus. 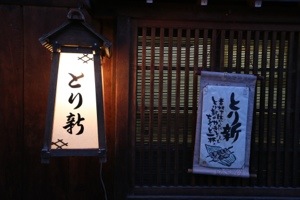 One of the problems was the size of the group which was huge with about 30 odd people showing up. 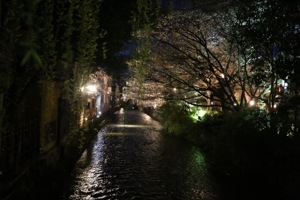 The other problem was how cold it was, at least I was the only one shivering away! I would really recommend bringing your coat or at least wearing some warm clothes. I seriously considered cutting loose from the walk early, since I was mostly thinking about how cold I was! 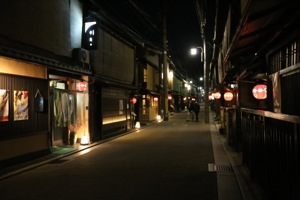 Still I stuck it out but it didn’t stop me from making tracks as soon as it was over to get warm again!