I had a plan. Some of it worked. Sort of.

First up I had decided that it would be good to go to the observation deck at Kyoto Tower since it was meant to have good views over Kyoto. The added bonus was that it was only about 1km away from where I am staying so an easy walk. After that I was going to head in the opposite direction and see a temple called Higashi Hongan-ji. I figured after that it would be close to lunch and I’d head to the Gion area and make stuff up from there.

I made it to the tower alright, wasn’t that hard to find after all and it kind of sticks out. Unfortunately there was a sign. The observation deck was apparently closed and wouldn’t be open until 1 April. I figured out rather promptly that that wasn’t going to work.

I started to retrace my steps and head back towards the temple I was going to see before a rather minor diversion saw me wander into Yodobashi Camera….

What? I just looked….

I got out before I spent all my money on more camera equipment and accessories.

Finally I made it to Higashi Hongan-ji. Unfortunately most of that seems to be under wraps still what I could see of it was nice, it’s certainly big enough! 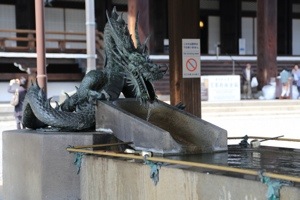 Photos weren’t allowed to be taken in the temple itself so I had to be content with taking some snaps on the outside and just looking inside. 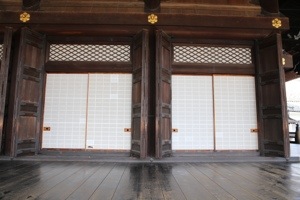 The Goei-do, main hall, is apparently one of the largest wooden structures in the world. 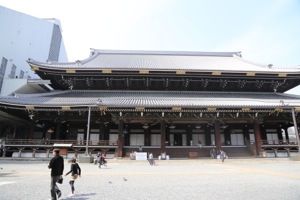 After that I started to wonder up towards Southern Higashiyama to have a look around. It was fairly easy to tell when I hit the area around Gion, apart from the fact that the streets and buildings were just plain more interesting there seemed to be a heap of girls playing ‘dress up’ for the day. Not sure I would spend the money just to dress up like a Geisha for the day to be honest but whatever takes you fancy!

After lunch I was wandering around trying to decided if I should just keep wandering down some of the side streets in the area or find something else to look at. Then this kind of stood out. 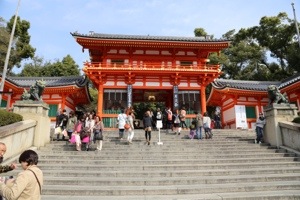 Turns out the rather, um, bright shrine is Yasaka-jinja and is considered the guardian shrine of Gion. It’s also on the grounds of Maruyama-koen, a large park apparently filled with lost of cherry trees and a good spot to wander around gazing at the blossoms of said trees. I decided I might as well check it out. 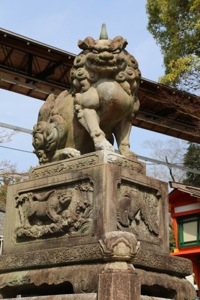 Most of the trees haven’t bloomed yet, however there were a couple of exceptions to this so I found out! 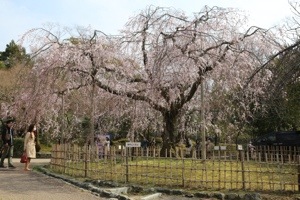 Of course there were loads of people trying to snap pictures of the small handful of trees that have bloomed in the park which certainly doesn’t make thing easy. I mean come on how dare anyone else have a camera and take photos! 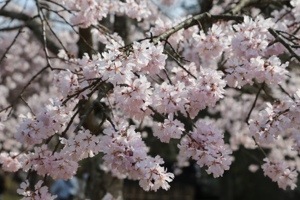 Still it’s a shame the weather hasn’t cooperated enough for the trees to be in full bloom, I think the park would be spectacular if it had!