My first real day in Tokyo, Japan turned out to be overcast, windy and somewhat cold still I was determined to go out and explore. So I decided to walk around and do a little shopping. Tokyo is known for it. Apparently.

Due to the delay in the flight from Canberra to Sydney I arrived at the boarding gate for my flight here just as the boarding call went out. No time to buy the couple of things that I wanted. Luckily for me there are a couple of big electronic stores. I managed to acquire the number one item on my list, a tripod for my camera at Bic Camera. Really recommend it if you are in the market for camera gear they have a huge range!

There were a couple of areas that stood out in my day of wandering the streets and one of them was walking through Omoide-yokocho (Memory Lane) a whole lane of small little hole in the wall type restaurants next to the railway tracks (Shinjuku-nishiguchi).

It was later in the afternoon by the time I first wandered through this area but I decided that I would come back for dinner. 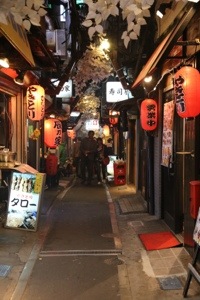 Omoide-yokocho was a different place by night. Not really having much to distinguish between the restaurants there I picked one at random. There was a couple of patrons already sitting on stools with there meals so I pulled entered and pulled up a stool as well. 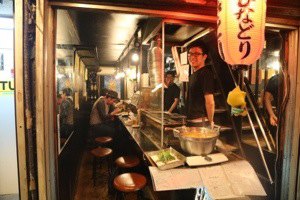 I ordered by the expedient of pointing at the menu, after all its Yakitori, so meat on skewers and managed to get a beer by pointing at the glass of the guy next to me. In short order I had a little old Japanese man sitting next to me. He got very excited when he found out I was Australian since he had apparently been to Australia. He even had photos on his phone of him in front of the Opera House.

It didn’t take too long for my meal to arrive. I’m not sure what the sauce was but the meal was simple and it was really tasty. 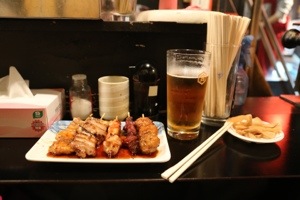 My dining companion left before I did. I didn’t realise that when he paid for his own meal and left he also paid for mine. I didn’t even get a chance to thank him.

Sometimes when you travel it’s the small moments that stick with you!