Manaus. What can I say about Manaus?  It’s one of those places that people come to so that they can go elsewhere, at least if you are a traveller anyway.  You’re either here to do a jungle tour or like me here to sail the river.

It seemed like my time on the river so far was fairly ingrained which was just as well since there really isn’t much to Manaus itself.

I got a few of those chores done, like washing and arranged the next and last leg of my Amazon River trip. I thought originally that there would be two more boat rides.

One from here to Santarem and then the last leg from there to Belem. As it turned out I was able to book a boat from Manaus to Belem. After getting off the boat from Tabatinga a whole herd of us ended up in the office at the port asking questions like when is the next boat out and how much does it cost?

There were a couple of backpackers in the herd who spoke Portuguese so they did the asking questions part which was kind of nice and saved me from a whole heap of pantomime.

If your looking to do the trip yourself I wouldn’t book the trip right away, hold off. As it turned out, strangely I think since in my experience it is not commonly so the hostel I stayed out calls a guy, if you ask them too, he comes and sells you the ticket to the boat and it was cheaper. Cabin or hammock it didn’t matter he was cheaper and it was convenient as well.

I did spend some time wandering around Manaus.

I kept running into a French couple from the boat, I guess that tells you how small Manaus is, everywhere so had dinner with them twice.

I wandered through markets and had a spot of lunch from one of the street stalls. I had no idea what I was ordering but it end up being a beef concoction with the inevitable rice and pasta all piled on the one plate. 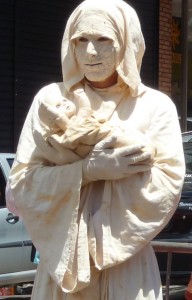 Karin and I went on a tour of the local Theatre Yes you read that right. They have an Theatre right here in Manaus which is in the middle of the Amazon. 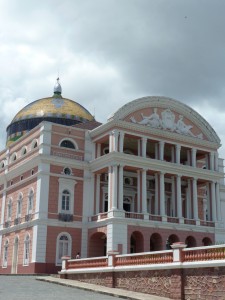 Anyway that managed to divert my attention for an hour or so.